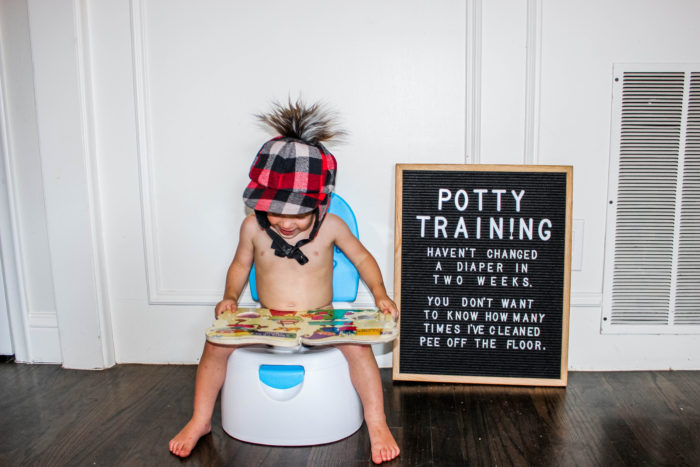 I have a confession.

I haven’t changed a diaper in 2 whole weeks!

At 22 months old, we are full on potty training over here.

I wasn’t necessarily planning to start so soon, but I read the highly recommended book, Oh Crap! Potty Training, and was so motivated by the end of it that I knew we could do it. It was such an easy read and if you are thinking of starting, ever, just pick it up and read it.

She has so many great tips in this book. One of my favorite chapters though was on busting myths.

She talks about what it really means to “wait for your child to be ‘ready'” and the myth that I have heard over and over and over again that “boys are harder to train than girls are.” I love her response to this as she says,
“Really false. This one ticks me off. A lot. Mostly because so many people buy this crap. Close your eyes and give this some serious thought. Why on earth would this be true? Some people suggest it’s because girls supposedly mature faster than boys. Perhaps this is true, but it becomes significant much later, like during the preteen years. Not so much at two. When I see a group of two-year-olds, they all seen pretty even ground. It’s all pretty much ‘don’t hit and please share.’ If anything,  I think boys are easier to train than girls. They can pretty much pee anywhere… And mostly, I refuse to believe that at this age, my son is not as smart as a girl! Use your common sense and intuition here. Boys are not harder to train than girls. There are some differences between the genders, but ‘different’ doesn’t mean ‘harder.'”

In the book she describes the potty training timeline as going from “Clueless to I Peed to I’m Peeing to I have to Go Pee.”

From there she breaks down the actual potty training into learning blocks instead of days.

The first block your child is completely naked all day until he/she can go to the potty on their own or with prompting can be anywhere from 1-3 days. In this phase, you watch them like a freaking hawk. Learn their cues, sense their needs, and get them to the potty! You will be exhausted, but you will be rewarded in the end.

The second block your child wears clothes, but no underwear, usually between days 2-6 and can be the hardest phase. Many parents want to quit here. Don’t. Push through. You got this.

The third block you add small outings. This usually comes around day 4-10.

Blocks 4, 5, and 6, using the bathroom with underpants, consistent self-initiation, night and nap time (unless choosing to do this part altogether).

Takeaways from the book:

I’m going to try and break it down for you day by day:

*note: I’m a “rip the band-aid” off kind of girl, and after I read in the book, more than once, that “potty training for both day and night at the same time is the most effective way to potty train” I knew that’s what I wanted to do. I didn’t want to have to go through all of this twice. So I was all in.
This however required us to transfer G to a toddler bed. I’ll write another post later on how all that went down.

Day One: Full naked day. Literally did nothing except watch G and try and figure out his potty cues and catch him before he peed everywhere, again.
I had him help me take all his diapers and “throw them away.” He seemed excited about it.
Since we decided to do day and night training together, nap time was naked too. – Woke up to a dry bed after the nap!
There were a couple accidents on the floor, but he also ran to the potty a few times himself. It was hard for him to climb up the stool and sit on the big potty (with kids insert), so when my husband got home I ran to Target and got a kids potty.
That was the best decision of my day. He was so excited about it and used it immediately.
We put him to bed in the toddler bed and watched him in the monitor, 5 minutes later, get out of bed, go sit on the potty to pee, and then run back to bed! I was in shock.

Day Two: Another day of nakedness. My husband got up with him in the morning and told me after breakfast G ran out of the kitchen and into his room where the kids potty was and sat on it and pooped all by himself without any prompting.
We took the kids potty to every room we were in and he ran and sat on it more times by himself than with me having to prompt.
We attempted a quick walk to the park. He went and peed in the potty at the playground, but he totally peed his pants on the way home.
Nap time – no pants. Dry bed when he woke.

Day Three: We went on our first car outing. Wore pants but no underwear. Didn’t pee in the car (hallelujah) Visited the pet store. Didn’t pee on the floor. Walked into Starbucks, did his little potty signal but we were standing in line and thought it could wait, nope. Peed in line. Oops.
No accidents at home. Nap time- dry. Pooped in the potty twice.

Day Four: After breakfast, he was playing in the playroom, I forgot to bring the kid potty in their and he went and pooped in the closet and shut the door. First poop accident! Ugh.
Took a car ride to his Grandpa’s to swim. I’m sure he peed in the pool, but we also brought the kid potty with us and he peed in that.

Day Five: Peed and pooped by himself in the morning. I don’t have to remind him as much anymore. Took a trip to Target (again, pants but no underwear) and forgot to take him to the potty when we first got there. I stayed too long and when we were walking he was giving me the potty cues and I thought I had more time, mom fail, he peed and started shouting “potty potty potty” as he was peeing. Oops again. But on the way out we stopped at the bathroom and he peed.

Day Six: He’s now getting good and going by himself. It’s hard for him to get on the big potty, even with the stool but he’s completely independent with the kids potty. He does best when it’s in the same room as him. At home sometimes we keep his pants off because he has a difficult time pulling them off and on himself. But if he’s wearing them he’ll come to get me.
We went to a friend’s to swim and have dinner. We stayed all evening and only had one accident. He was too into playing and we didn’t bring his little potty, plus he didn’t know where to find the bathroom in their house.

Day Seven: We were out of the house all day with zero ‘accidents’! We went to look at a house for two hours. I prompted him many times just in case. We went to Whole Foods and my husband took him to the bathroom when got there and when we left. Then we went to our friend’s for a memorial day swim party, and although I’m sure he peed in the pool, he didn’t pee on the floor and he didn’t pee during his nap!

The following week was pretty much a continuation of this and reinforcing everything. There are days he has no accidents and has been a few days that he has, usually when the potty isn’t in his sight and we’re busy playing or doing something that he doesn’t want to leave the room to go.

Pushing his pants down to go is still hard for him but he’s getting better.

In another post, I’ll talk about the transfer to toddler crib and how we trained him to stay in bed and not roam around.

Potty Training Must Haves:
*clickable links below
Oh Crap! Potty Training book – order it now! The author Jamie Glowacki, also has a youtube channel you should check out.
Kid’s potty – again, it’s not any grosser than changing a diaper and makes them so much more independent. Don’t worry about getting anything fancy.
Step Stool
Toilet seat
Flushable Wipes – for the poo
Books to distract while they poop
Faucet Extender – so you don’t have to hold them every single time they wash their hands.
Patience and maybe some wine – you got this!

This video pretty much nails it!

Have you potty-trained yet? What was your experience like? What tips would you add?