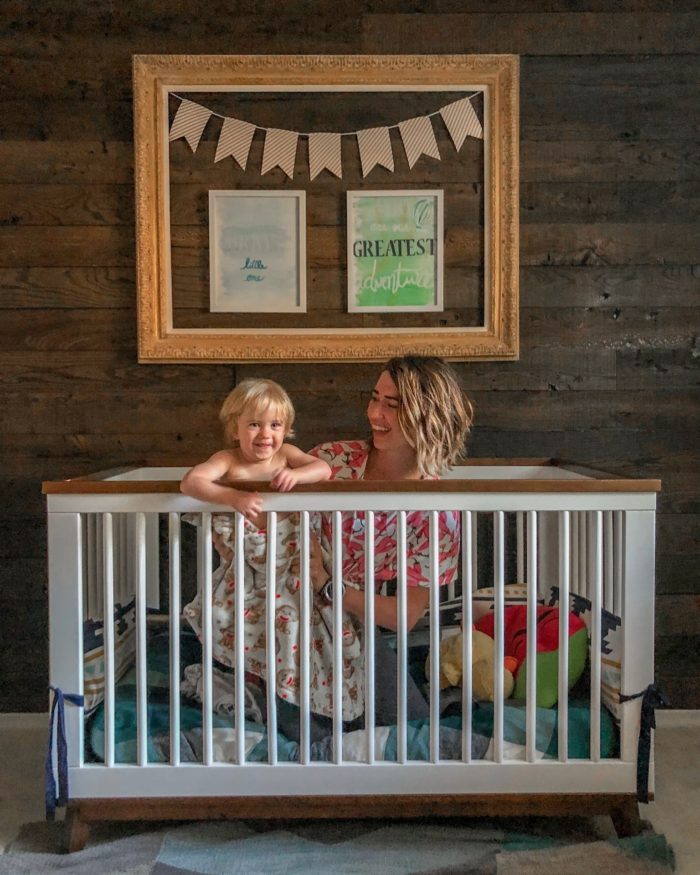 Alright, here it is. You’ve all been asking me to put together a post on how we transitioned G from his crib to a toddler bed.

I will say, I was nervous to do this because, like everything else in parenting, I’ve heard so many stories of how this could go wrong and it could ruin his sleep. I probably wouldn’t have chosen to do it so soon if it weren’t for the potty training.  In reading the book, “Oh Crap! Potty Training, she says time and again “if you can handle it, it is way better to potty train for both day and night at the same time.” And I’m a rip the band-aid off kind of girl, so we decided to go for it.

But in order to potty train for the night, the child has to be able to get out of their bed and go to the potty, thus the sudden need for us to switch to the toddler bed.

Choosing to potty train for the night was kind of a last minute decision, so we did the whole crib to bed transition and nighttime potty training all in one big swoop. It was kind of like “ok, this is the new norm. We have a big kid bed and we use the potty.” He didn’t seem overwhelmed by all the changes.

Night One: At the end of day one of potty training, G watched us take his crib apart and convert it to a toddler bed.  He was so excited about it and immediately climbed into bed and wanted to go to sleep. He was pretty worn out from a full day of potty training.

But of course, he needed to test out his new freedom. After 5 minutes he climbed out of his bed, went potty, and then ran back into bed. I almost cried tears of joy.

Then, not 5 minutes after that he went to the door, opened it and came walking down the hall. Crap.

I picked him up, walked him back to bed and told him he had to stay there until morning.

He waited another 5 minutes, then crawled out of bed again. This time, we saw him on our monitor and I spoke into the monitor microphone saying “Get back in bed now.” Hearing my voice in his room must’ve put the fear of God in him because he ran back to bed and didn’t get out again.

I knew though that we needed night two to go better, so I immediately ordered the Hatch Baby Time-To-Rise clock that a few of you recommended.

The next morning he woke up earlier than normal and wasn’t about to stay in his room. So we were up for the day.

What makes this clock different (and in my opinion better) than all the other time-to-rise clocks out there is that you control the settings from an app on your phone! I’ve heard many say they tried some of the other preset, wake clocks, and they don’t work because what happens when you’re child wakes up at 6 and the clock doesn’t change for another hour? How are they supposed to learn in the beginning?

How we introduced the clock:

I repeated this during nap time too.

By this night we added a lock to the outside of the door. He was locked in his crib before, and I’d rather him be locked in his room than roaming freely throughout the house.

I did the same thing as night two, the next morning changing it to green minutes after he got up and making a big deal about the light being green. This time when I came to get him he pointed to the light and clapped.

We put him to bed the same way with the clock. The next morning I heard him stirring around 6 am, and then, I watched him on the monitor look up at the clock light, and lay back down!! He went back to sleep for two hours! Glory hallelujah.

Nap and bedtime all went the same with the clock. He’s definitely more aware of it and points to it saying his version of “light” and “night night” when he sees that it’s orange. He now knows that means it’s time for bed.

The next morning woke up and the light was still orange and he got out of bed to pee and then layed in bed and played until it turned green. Almost 30 minutes.

This was when I could tell he really understood what it meant and when I went in there he was pointing to the light and saying what I assume was supposed to mean “green”. Toddler words are funny.

I am not in any way sponsored by Hatch Baby (though if you’re reading this, please come sponsor me! 😉 . I just genuinely think this is an awesome product and has made what could have been a difficult transition go very smoothly.

This is what worked for us and I hope it helps you in your crib to toddler bed transition!

I’ll have the nighttime potty training post up for you next week.

Please share any tips and tricks you have in the comments below!