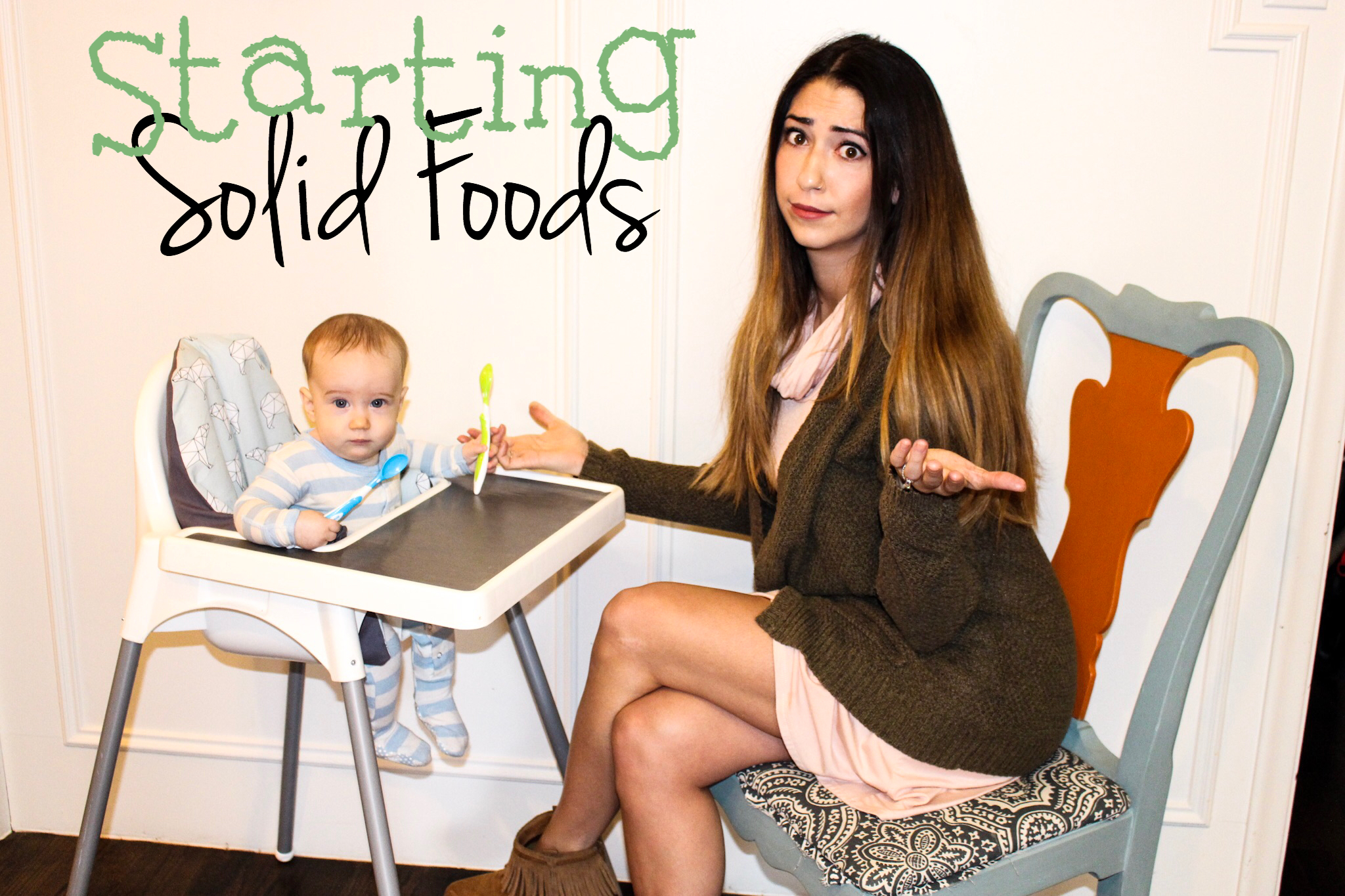 When Griffin turned 6 months, I naturally turned to my friend Google to find out how to approach this whole “starting solids” thing. And OH MY WORD!

My findings read like this: “You should start around 4 months. No, wait until 6 months so their digestion is best. Feed them rice cereal. Don’t you DARE feed them rice cereal, it’s all sugar and will ruin their gut. Buy them organic purees. Are you kidding me? Make your own dang food mom, it’s obviously so easy. Start with avocados, or sweet potato, or banana. Banana?! No way! Don’t feed your baby fruit for a long time or they will only want sweet things and be addicted to sugar for life and never want to eat veggies.

Try mixing a few things. Umm, slow down there, ONLY feed them one food at a time. Give them nuts early on. Your child could be allergic, never give them nuts. Nobody does purees anymore, it’s all about ‘Baby Lead Weaning.’ Give your baby big chunks they can pick up by themselves and gnaw on. It’s great for improving fine motor skills. What?! Don’t do BLW your child will choke and die.”  Dear internet, this is crazy. Calm it down. You’re stressing me out.

If you are in the “starting solids” phase with your little one, you too have probably encountered some (if not all) of these controversial approaches. I really did not know there would be so many different opinions on the subject, though I shouldn’t have been surprised, as it would seem there is controversy around all things motherhood.  On the one hand, because there is so much out there it can feel as if I am doing everything wrong, on the other hand, because there is so much out there it’s as if I can do no wrong. I mean surely something I do will be correct in some way, according to some approach…right?

To ease your mind, I thought I would share with you the first month of our starting solids experience with Griffin.

When did you start? I chose to start him at solids when G was 6 months + 1 week.
Why? They say you should wait until your baby can properly hold themselves up and shows interested in food (reaching for your food). Griffin was doing all this by 5&1/2 months, but I chose to wait until 6 months because that’s what our pediatrician recommended and I had also read a lot about babies’ digestive systems not being adequately developed before then.

What the heck is BLW? BLW stands for “Baby Led Weaning.” The gist of this is that the baby leads the way on eating solids. There is no spoon feeding involved and no need to make purees. Can I get an amen! You just give your baby big ole chunks of food (big enough that they can pick up and gnaw on) and sit back and watch them explore the new exciting world of starting solid foods. Your baby gets to explore textures while developing their motor skills. It is suggested to wait until at least six months old to start solids this way so the baby is developed enough to pick up the food themselves.

What food did you start with? We started with avocado! Their soft creamy texture makes a great first food and are full of “good” fats and have a high nutrient content, excellent for baby’s brain and physical development. Plus, they’re my favorite food and I secretly want it to be G’s favorite too.

How did you start? I did a combination of both Baby Led Weening and purees. I first gave G a large piece

of avocado (cut in half and then cut that half into thirds). The piece needs to be large enough for him to pick up and hold and gnaw on the end.

He picked it up and chewed on it. I dredged it in some nutritional yeast so it wouldn’t be so slippery but it still was. A big piece slipped into his mouth and he started gagging (which is totally normal and what babies are designed to do>>read here on gagging vs choking). It gave me a mini panic attack though so afterward I mushed up the rest of the avocado with some breastmilk and fed it to him with a spoon. He kept reaching for the spoon to feed himself, and he actually ate a good amount of it. He loved it.

What other foods did you try?

Days 1-3: We did avocado for the first three days. I found the BEST way to let him feed himself avocado was to keep the peel on so he could hold it better. Then he would just chew on it and suck off the actual avocado meet part.

Days 4-6: Carrots. I did the same thing as with the avocado. I steamed it until it was super soft (could easily mush with two fingers) and let him play with/ feed himself. After a couple minutes, I gave him some on a spoon that I had mashed up.

Days 7-9: Zucchini. Cut the zucchini long ways and then steamed it. Same approach as before. Let him explore and feed himself big chunks, and then pureed up the rest to feed him. He loves zucchini!

Days 10-16: Sweet potato and butternut squash. By this time I was starting to feel more comfortable with the whole BLW thing. I gave him pieces of baked sweet potato that I cut into long thin chip shape pieces. I left the skin on so he could hold it and just eat out the center. He did great with this and didn’t gag once, and I didn’t even bother to puree any. I even added a little cinnamon one day.

Days 17-18: Banana! He got his first taste of fruit and was in heaven. I  cut the banana close to the bottom so he could hold the end like a handle and chewed out the middle. I also gave him some more avocados.

Day 19-20: Cucumber. I initially just gave him a piece of cool cucumber one day to chew on while I was cooking. He loved munching on it and would suck out the center part. The outside is too hard for him to actually bite into and eat though.

Day 21-22: Spinach. G had been reaching for my salads and pulling out the spinach leaves and munching on them, so I decided it was time to give him a taste. I sautéed spinach in some homemade broth and blended it with a little avocado.

Day 23– Blueberries. We went to the arboretum and wanted to bring something for G in case other kids were eating so I grabbed one of these mesh chew things and threw some blueberries in it. He went to town on it.

The rest of the week we alternated between all of these foods. Avocados are definitely his favorite so far. He eats the majority of his food now by himself via the Baby Led Weaning approach and I really like it. I haven’t pureed anything in a while.

I still nurse him as much as I did before, and he only eats with us right now at dinner time.

I hope this post has helped you in your starting solids adventure. It really is so fun to watch your baby explore all the fantastic new flavors out there.

The Ultimate Guide to Baby-Led Weaning

Baby Led Weaning – All You Need To Know

Question: How did you start solids with your little one? What was your babies first food?