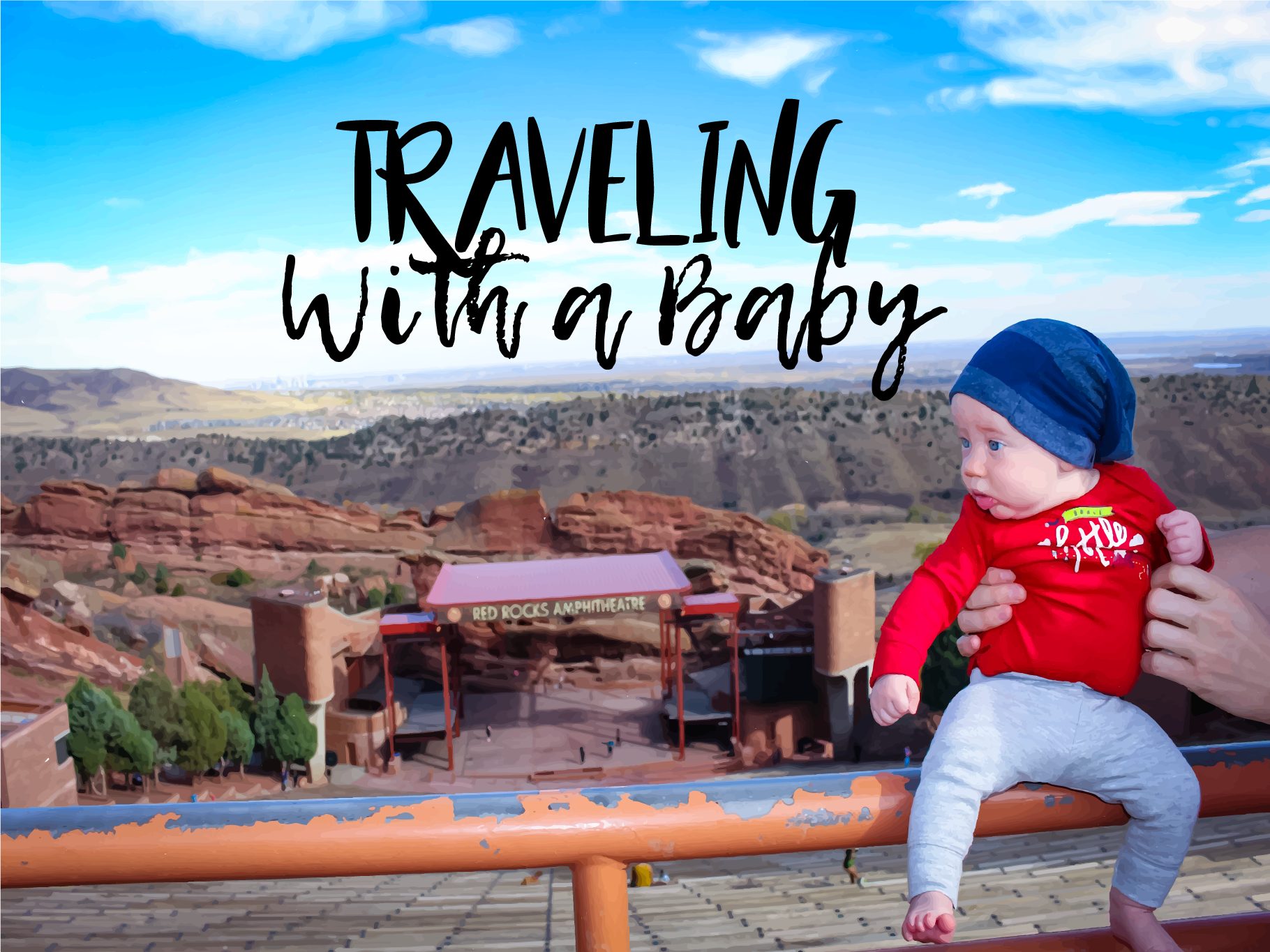 In October, we took Griffin on his first trip to Colorado. He was about 3 months old. Leading up to it I was a little nervous. I didn’t know how traveling with a baby would be. I didn’t want to be “those people” on the flight with the fussy baby that annoyed everyone. I could only hope and pray he would sleep through it all.

Lucky for me, and the people around us, he did great. People had told me to travel with him as much as I could before he’s mobile and I can see why. He was pretty easy, couldn’t go anywhere, and slept for most of it. Plus, baby’s under two fly for free! Woo hoo.

Here are a few quick things I learned from my
experiences traveling with a baby.

1. Carry on when you can: My husband and I are light packers and always try and carry on our luggage when we can (even spending 2 months in Europe it was carry on all the way!). I hate having to wait and search for our checked luggage after a flight. Also, I have seen one too many friends get their luggage LOST! That just sounds like a nightmare with baby. I like to just grab my stuff off the plane and go. I take one carry one (with all mine and Griffin’s clothes) + one large purse/diaper bag with all things baby.

**We were lucky enough that we stayed with friends in colorado who had an infant carseat that we borrowed so we didn’t have to worry about bringing ours and it was so nice. If you’re renting a car though I have heard that some places also have crests for rent.

2. Choose the right flight time: On the way up we took a really early 6am flight, and on the way back we took a 9pm flight. I initially thought the morning one would be harder because he’d be awake, but it was just the opposite. I find he’s always happiest in the morning after a long night’s rest. So the morning flight was filled with a playful smiling baby for half the flight and then he fell right to sleep for his morning nap. As the day goes on he tends to get progressively crankier. He was so tired by the time we got the the flight because we kept waking him up and moving him around. He was fussier than normal for the first part of the flight and took him a little while to settle down. Once he did, he was out cold, but compared to the morning flight, he had a harder time just because he was so tired.

3. You can always buy more diapers: Don’t worry about stuffing your bag with diapers and wipes. That’s precious luggage room that can be used for other things, like that extra pair of shoes you want. Instead, bring just what you need for the travel time, and then stop and buy some diapers for the stay when you get there.

4. Don’t forget the white onesies: A friend told me this tip and I thought it was brilliant. You never know when your sweet little babe is going take the biggest crap of his or her life right up and out of their diaper. When you’re home, you just take the poor soiled onesie and pop it in the wash. But when you’re traveling you’re stuck carrying it around the rest of the trip, because of course you don’t want to throw away that super cute travel outfit that you just bought! If he just ruined a plain white once on the other hand, you can just throw it away and move on with your flight.

5. Wear your baby like a boss: In my opinion it’s so much easier for me to just strap my baby too me and go. He’s always much happier and calmer when I wear him, and I don’t have to worry about maneuvering a large stroller through a crowd of people. When I went through the security line they let me keep wearing him and just had me go around the machine thing and do a hand swab test instead. I wore this baby k’tan and my husband sported the ergo.

*I wore him on the plane, through the airport, and on the train into Denver, and he slept snug as a bug through it all.

6. Take advantage of early boarding: just do it. Most airlines will call for “families with infants and young children” to board early. It’s kinda of nice to get on, get the luggage up, and get settled in with out too many people around eyeing you and your baby.

7. Choose your seating strategically: The flight up to Colorado was full so we couldn’t take up a whole row to ourselves. I chose the window seat over the isle and I’m happy I did. I liked feeling like we had our own private little corner, and I could turn my back and hide away when I had to nurse him. It was nice.

BUT, if your flight is not full and you’re traveling with someone, here’s what you do: have one person choose the seat by the window, and one person the isle, and make that baby visible to all walking by. More than likely no one is going to voluntarily choose to seat in a middle seat with an infant, therefore for leaving you with a whole row for the whole fam bam. We did this and it worked like a charm. *Southwest doesn’t assign seats so you choose your seats as you board.

If it’s a flight where you have assigned seats when you purchase your ticket’s online, just go up to the clerk before boarding and ask if they can move you to a row with an empty seat. I would do this even when I didn’t have a baby, although usually it was to ask for an extra exit row seat, which more often than not they would give me.

8. Prepare for take off: They say to nurse or feed your baby when you take off and land to help with the ear popping. For both flights as we took off I nursed Griffin but when we were starting to land he was asleep. I considered waking him to nurse because I was afraid he’d wake up crying from the air pressure, but he didn’t even flinch. He slept right through it without a problem both times.

9. Noisemaker apps are gold: Again, we like to travel light, so I didn’t want to pack a whole noise maker. There are tons of apps you can download and then just leave your phone by him while he sleeps. It was nice to not have to have everyone worry about being quite while we were staying with our friends. Everyone could talk and hang out and those soothing ocean sounds drowned out all of our extra party noise.

10. Don’t forget the birth certificate: I didn’t even think about this until a week before the flight then had to frantically run around trying to get his. When we called the airlines (Southwest) they told us that yes, even for a domestic flight we need to have his birth certificate, or “verification of birth document” from the hospital.  No a social security card doesn’t count. It seems that basically what they wanted to see was the baby’s birthday (is he really under 2 and qualifying for that free flight). I have a couple friends who said flew without it just fine, but I wasn’t really willing to risk it. They did not ask to see the birth certificate on the flight out, but did ask to see it on the way back. Better safe than sorry.

Try not to stress. The flight is the shortest part of the trip and will be over before you know it. Then you’ll be at your beautiful destination and on to a [hopefully] fantastic vacation with your sweet little baby love. Oh the memories you will make!

Cherish this time, because in a couple quick years, you’ll have to start paying for that baby of yours. Take advantage of those free flights while you can 😉