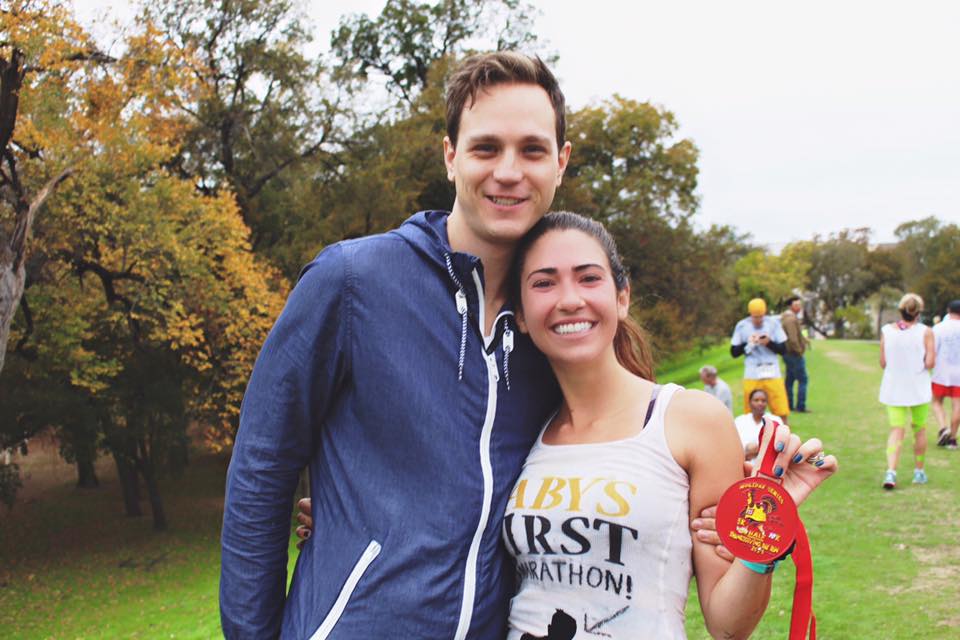 After I found out I was pregnant, I knew I wanted to tell my husband in a fun and creative way. I knew he would be just as shocked as I was and wanted to surprise him. So, a couple days after I found out I was pregnant, I went out and ran 13.1 miles (mostly to run out all my adrenaline, and also just to make sure I could). Then I called my friend to tell her I would run the Thanksgiving half marathon with her that next Thursday (she’d asked me a while ago). After that, I had to do the hardest thing ever, keep it a secret for a whole week! This was not easy, especially since that weekend we had birthday parties, friends in town, nights out dancing, date nights, and lots of other reasons to drink almost every night that week… and obviously I couldn’t, but I had no one on my team who knew about it to help me out. Even my husband would come over and hand me drinks when we were out and then look confused when he’d look down an hour later and see none of it gone. “I’m on a cleanse,” became my go to answer, and luckily my friends know me and my healthy ways well enough that that didn’t seem like that weird of an answer.

After a week of torture, Thanksgiving morning came and I ran a half marathon with my friend Shay wearing a shirt that I had made saying “baby’s first half marathon” with a silhouette of a baby on my tummy area. Shay was in on everything so she could record the reaction for us. I had the shirt covered up until the very end of the race to make sure my husband wouldn’t see it too early. Then when I crossed the finish line he was on the other side waiting and taking pictures. It took him a minute to actually notice the shirt, but once he did, his reaction was priceless! You can watch it on our announcement video at minute 2:09. He first has the look of complete and utter shock and what I labeled his “vomit face” as he is trying to process this information, then he instantly changes into the most over the top joy, excitement, and tears. It was so worth keeping it a secret for a week.

After that, we kept it to ourselves for quite a while. It was kind of fun not having anyone else know. We knew we’d tell the family at Christmas, and didn’t want to tell people before them. We also knew though, after loving having his reaction recorded, that we wanted to tell other people in fun ways and record it.

That’s when I found these custom wine bottle labels on Etsy and ordered a dozen of them, and a couple of these.

And we ordered these darling little “Bun in the Oven” ornaments for our families for Christmas.

We loved getting to give these gifts to our family and friends. We had so many people tell us this was the best way they ever received the news. It was so fun to make people feel special that way and get them excited with us.

I would highly recommend recording peoples reactions when you tell them, just to have for yourselves and look back on later. We’ve replayed many of our friends reactions and gotten a good laugh out of it as we watched them figure out the news.

We took everyones recorded reactions and put them together into this video on youtube, which we used as our final public announcement on social media.

What did you do for your baby announcement?! Share a picture or link in the comments below. I want to see them 🙂