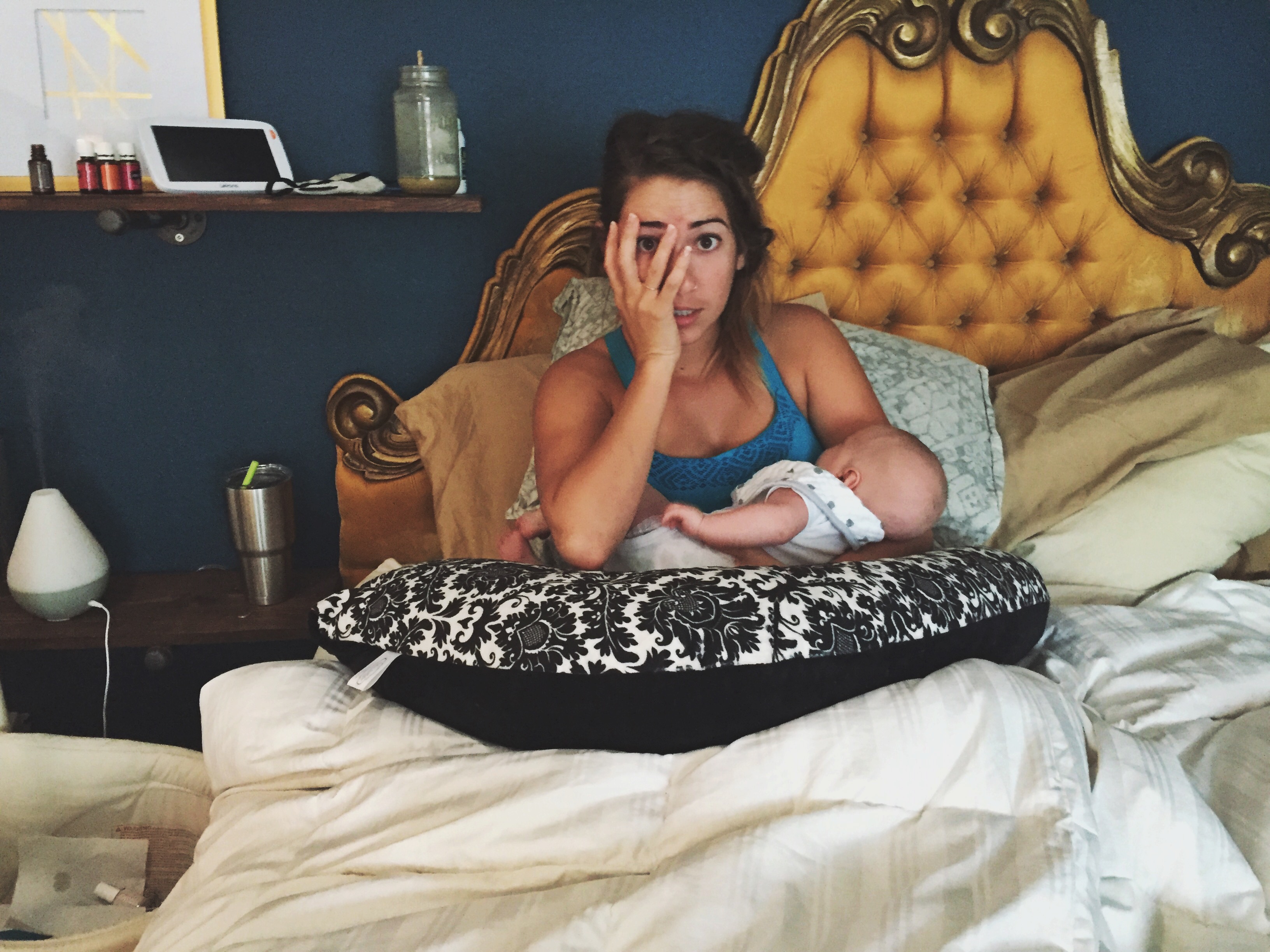 Oh hi there little babe. I see you’re awake…again…how nice of you to want to hang out at 1:00am.

Holy crap, my baby wants to eat a l l  t h e  t i m e. It’s crazy. I’m like, ‘how are you hungry again?! I feel like you’re going to burst!’ But nope. He keeps coming back for more. And it can be hard, especially in the middle of the night when I’m so dang exhausted and have to pick up this tiny human and feed him and pray he falls back to sleep afterwards. Because the last thing on heaven and earth that you want to happen is for him to wake up…like really wake up, and then stay awake for hours.

Let me tell you a horror story of that happening to us.

Once upon a time, our baby woke up in the middle of the night to feed. My husband, who usually sleeps through all of it, was by some miracle awake so I asked him to go change Griffin’s diaper. I don’t know what he did in there. He must have turned on the lights and had a party I guess, because when he came back my sweet sleepy baby, was now wide awake. It was 3am. The next 2 hours were then spent rocking, crying, begging, pleading, singing, and loosing my mind trying to get him back to sleep. Finally, at 5:11am, he dozed off. Thank you Jesus.

Since then, let’s just say there are no more middle off the night diaper changes, if it’s just pee. Learn from my mistake, nothing wakes a baby faster than a cold, wet wipe to the netherlands. You may be thinking, shame on you, he can’t sleep in a wet diaper. Actually, there have been studies done that show it doesn’t effect their sleep. Yes, I researched it. Now, if  his clothes or sheets are all wet, or if it’s poop, then yes I will change him. But I’ve actually found many parents that will not change their baby’s diaper if it’s just pee. I don’t know about you, but I’m a much better human when I get more sleep, and so is my baby. When we stopped changing his pee diapers in the middle of the night, he would go right back to sleep after eating.

What nighttime feeding looked like for me during the first 2 months:

Sometimes I hear of people doing ridiculous things like wake up their baby, feed him, change him, play with him, bath him, change him again, read a story, then rock and sing him back to sleep….every time. Hell to the no. That sounds like way too much for 1am. Don’t do that to yourself.

Here is what the process looks for us.
I like to think of it as a mission. In and out. Get the job done as soon as possible and get yo tired ass back to sleep…for at lease the next 2-4 hours.

1. Pause and make sure he’s actually waking up and not just stirring in his sleep. Sometimes those babies trick you. Babies actually stir from a place of sleep to wake for about 20 minutes.

2. Feed him. For me this usually only takes 10-15 min. I usually only do one breast per feeding, then do the other side the next feeding so he will get to the hindmilk with each night feeding. Hindmilk refers to milk at the end of a feeding, which has a higher fat content than the milk at the beginning of that particular feeding. Depending on your milk flow these feedings may be longer….even up to 30 min.

3. If he has a poopy diaper, I very calmly and quietly change said diaper, other wise I skip this step.  I do know people though that will change the diaper first each time, and then feed them to sleep. Find what works for you and your babe.

Here’s what the first couple months of nighttime feeding has looked like in our house.

*These are generally the times Griffin would wake up on his own to eat. The first two weeks though, he woke up way more often.

5:00-6am: he usually wakes up for another feeding around this time then goes back to sleep for another hour or too.

Some babies wake up more often than this. And there were times when Griffin woke up every hour and a half. Those were the nights I didn’t think I’d survive. It’s hard to have your sleep interrupted every couple of hours, especially if you’re solo breastfeeding and have no one to share the burden with.

A friend recently told me that, in her state of utter exhaustion, she would have to fight the urge to dump a glass of water over her sleeping husbands head in the middle of the night just so he would have to be awake too. To my knowledge she never did it…but I’d be lying if I said I hadn’t thought of doing the same thing.