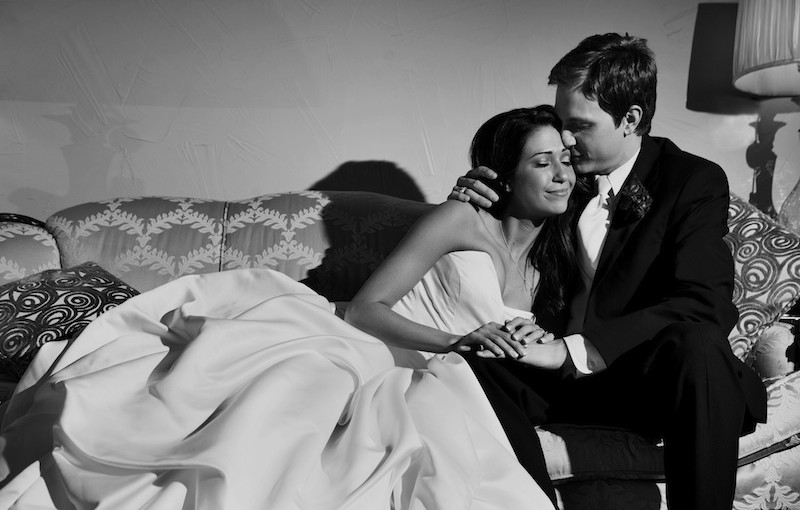 Yesterday was our three-year wedding anniversary. It’s crazy to think that it’s been that long already since he orchestrated the most incredible proposal ever and then 3 short months later we said I do! One of my favorite things, when reading other blogs, are the posts where they open up, let you into their real lives, and show you a little more of who they are. So I thought it would be fun to take a brake from the recipes and running posts for a change and share a small glimpse into our lives with a few questions we both answered separately.

1. You’re favorite thing about the other person?

A: Many people who know my husband would probably think it would have something to do with how funny he is and can always make anybody laugh. But truly it is his heart for people and his desire to give that I admire most. Time and time again I watch him give to others (time, money, you name it) without want in return.

S: Angela is the most selfless person I’ve EVER met. She will put anyone before herself, whether they have been mean to her, neglected her, been rude, anything…she would literally lay her life down for anyone on the planet cause she genuinely loves others more than she loves herself.

2. Things the other person can’t live without?

A: Turbo! Turbo is the best dog. Sandon had him in college, but he’s now my dog too. I would often joke when we were dating that Turbo was the only one who I had competition with for attention.

A: Every year we’ve made it a goal to go on a trip somewhere and leave the state at least once! The first year we went on a cruise, the second year we went back to where we had our honeymoon, and this year we went skiing in Utah, and we’re going to Hawaii in October to watch my Dad compete in Ironman Kona!!!
Another thing that’s become a fun tradition is to go to a Bed and Breakfast once a year. This is the perfect thing for a quick get away because it doesn’t have to be far away.

S: We try and take a trip every year.

4. What’s the best dish the other person makes?

A: Well when I first found my husband he pretty much ate rice for breakfast, lunch, and dinner. So he’s pretty good at that. Which he usually whips up with some veggies and makes a pretty awesome veggie stir fry!

S: ALL of her food is AMAZING..seriously, she comes up with new stuff all the time, and it’s amazing…unless she makes Polenta…that’s the one dish I don’t like her to make. Some specific dishes are the asian stir fry (which we make together), buffalo orzo soup (new but great), any sandwich she touches magically becomes the best, oh and I can’t get enough of her banana bread!

5. What you’ve learned in three years?

A:  Communication is key, and no he can’t read my mind….even when I continue to glare at him. Ha! I used to think I was being so nice and chill by not asking for what I wanted, only to get upset when things didn’t go the way I wanted it…. which let’s be honest isn’t very chill.  Learning to be more open and comfortable with sharing my thoughts and wants is really important to feeling connected.

S: I’ve learned that I’m a crappy person compared to her. She makes me want to be better just by the way she lives. I’ve learned to not get so upset about dumb things and chill out a little more. But most importantly I’ve learned that if you take just a little time to show someone you care, no matter how small, it means a lot.

6. What’s your favorite look for each other?

A: He has this pair of  dark jeans I like, with a simple v neck or button up, and those converse he wore in our wedding.

S: Ang has the most INCREDIBLE FACE. I love when she wakes up in the morning and has that tired look, messy hair, no make up, cause she is so so pretty just the way she is. She looks great in dresses. Not those mini ones or the long or fancy ones, just a simple summer dress, no makeup, and sandals. That’s how I’ll take my Ang served up thank you very much.

7. What about marriage were you not expecting?

A: I didn’t realize how much work it actually is. You have to learn to radically love that person everyday regardless of what they’ve done to upset you.

S: For it to actually be work. Everyone says it is, but really, it’s not a cake walk, you’ve got to work for it to make it goo. But it’s so worth it. But I also didn’t realize that every step I would become a better me because of her.

8. How do you keep things fresh?

A: We try new things together, whether it’s a new restaurant or rock climbing, or skipping town for a night and exploring a new place, something so that every day does not feel the same. I also think it’s important to learn the other persons love language and do things for the other person to make them feel special and loved. Finally,  my favorite website to get ideas for random dates and keeping it fresh is The Dating Divas. They have so many fun printable and amazing date ideas, for home on a budget or a weekend trip away.

S: Buy funny presents and making each other laugh daily, also our random getaways and ‘stay’cations.

9. Something you don’t see eye-to-eye on?

S: Talking about our future children’s names…girls are weird like that. Why do you want to talk about cute names and things that don’t matter right now? She used to want to talk all the time about it…I think she gave up though because she doesn’t bring it up anymore…I’ll trick her and bring it up next week.
Also, she always steals food off my plate.

10. Three years out, is there one moment from your wedding that stands out the most?

A: I loved our first dance! Sandon is such an amazing dancer and just twirls me around with easy. We had my former roommate sing our song live with a band of my husbands friends. In the background we had a music video of us playing that we had made that summer to specifically go with the song. So people at the wedding could watch that playing behind us while we danced. It was beautiful.

S: When those doors flew open, the band burst in, and I started balling because how excited I was for the day to finally come…

Another thing we both loved was our “Mr. & Mrs. Smith” poster that we used for our guestbook.